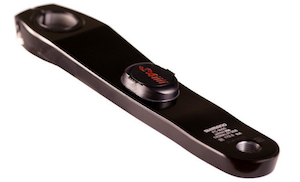 A cheaper equivalent of the Stages left-crank power meter, and it can also be attached to your existing crank arm!

Claimed to be accurate to 1%, the 4iiii Precision power meter is available either pre-installed on a crank (or crankset) of your choice, or attached to your existing equipment in the company's factory. The Precision, released in early 2016, requires a coin cell for power, and has now been joined by a rechargable version - the Podiiiium.

If you want dual leg measurement then the company will deliver an extra power unit attached to the spider, filling in the gap next to the right crank arm.

The left crank unit is in an exposed part of the bike, but 4iiii have made it durable and quite capable of withstanding dirt and rain. The battery compartment is the same style as that of the Stages meter, which is a long-term proven design.

One apparent downside of this unit when compared to others is the need to perform a zero offset calibration at the start of each ride, or when there are significant temperature changes. If power readings are way off without doing this then it's a bit of a nuisance, as you don't want to be fiddling around with the menus of your head unit when you're ready to ride.

Calibration allowing, accuracy does appear to be on the ball, and this is a fairly cheap way to get decent readings for many years of riding.