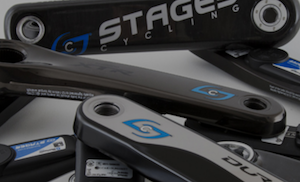 Stages make an excellent all-rounder power meter. It may not be the cheapest on the market, and it's not necessarily as accurate as the likes of SRM, but the Stages crank-based meter has stood the test of time and can be relied upon to to a decent job. I've owned one (second-hand) for around three years, and have had faultless performance from it for a few thousand miles of use. The button cell battery does drain eventually, and it's annoying if this happens during or just before a long ride, so I've learnt to check the battery level using the Stages iOS app - and to keep a spare CR-2032 cell in my toolkit.

Stages makes their meter available on a wide range of cranks, which is good - but this also of course highlights the fact that the meter is not designed to be transferable between bikes. You certainly can transfer the crank between bikes, but both bikes need to have the same crankset model - and crank length.

Current deals for the Stages Power