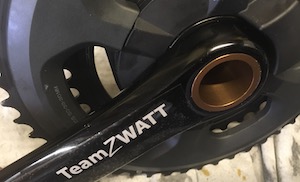 A new player on the market, Team Zwatt has integrated the power meter very neatly into an FSA crankset.

In my first year of running this power meter (first on a cyclo-cross bike, and later on a time trial bike), I can confirm that this is a very well built product and with excellent power reading. The power meter is buried deep inside the bottom bracket spindle, so there is nothing visisble that can really get damaged. The nicest "extra" that this meter has over most others is the battery recharge point, so all I do is plug it in around once a month just to top it up. It's really nice not having to squeeze "just one more ride" out of a button-cell meter that's reporting low battery!

The company helpfully provides an app (for both iOS and Android) that calibrates the device and performs firmware updates. These firmware updates are optional, which is just as well as the latest ones for me have put the meter into fake-power mode as the app can't validate my subscription to Team Zwatt. Not a problem as I could easily roll back to an older firmware, but it was initially disconcerting to watch my 3s power readout constantly jumping up and down! Sensitivus (the company behind Zwatt) are very responsive on support, and will be fixing the app issue in due course.